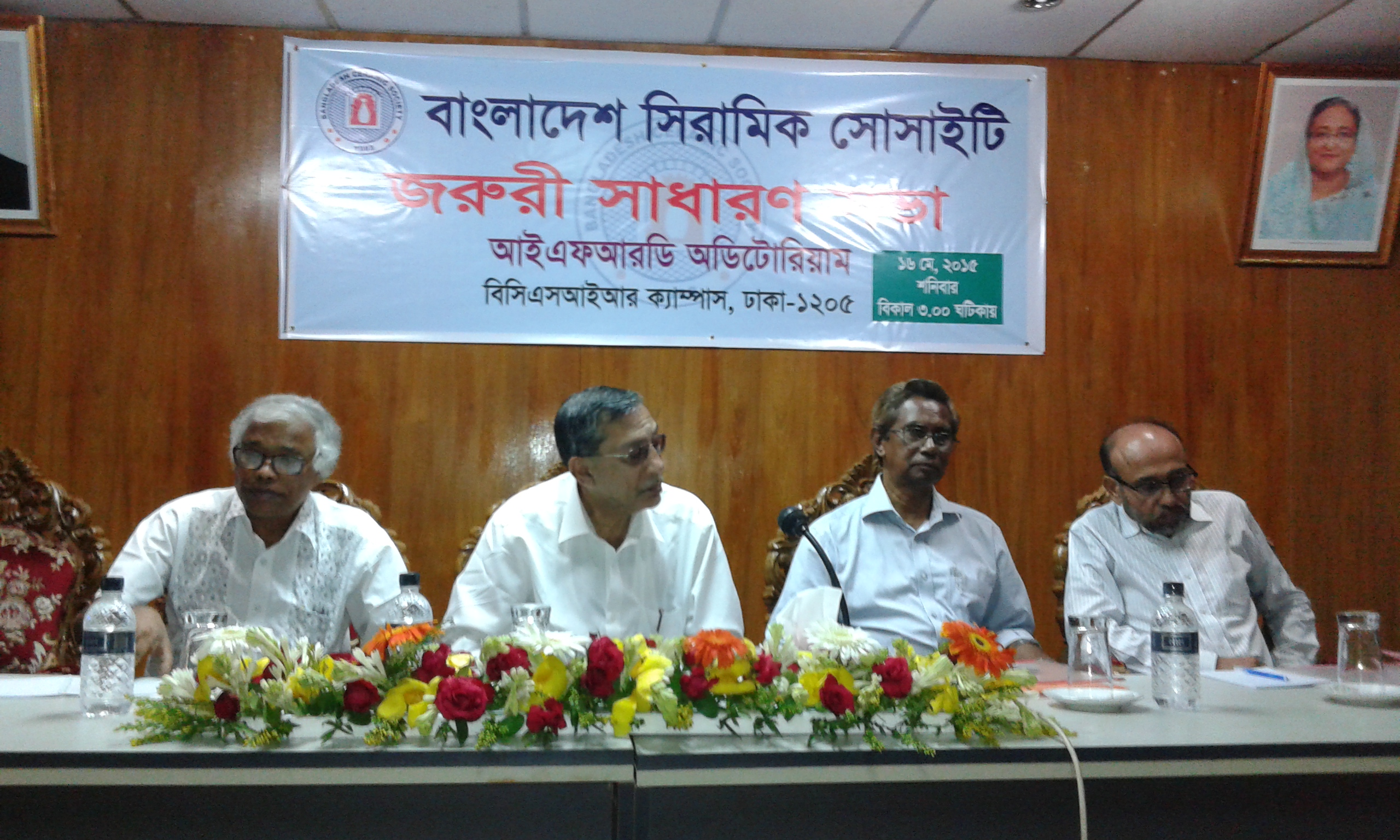 Bangladesh Ceramic Society is a voluntary organization of the professional Ceramists, Chemists, Technologists involved in the ceramic industries, research organization and institutions of the country. Among the various activities of the society, the most important is its Annual General Meeting. But due to the unavailable circumstances, AGM of the BCerS was not conducted in time after 2006.
At this condition, an Emergency General Meeting of the Bangladesh Ceramic Society (Bcers) was held on 16th May, 2015 at IFRD (Institute of Fuel Research and Development) auditorium, BCSIR Campus, Dhaka at 3.00 pm. In absence of the President Mr. R.M Khan, Vice President, Mr. Asif Ariff Tabani, presided over the meeting. This emergency meeting was conducted only by the notice of fifteen days. This task was very difficult. We have no total list of members. Some addresses of members were changed. We could not circulate the announcement of the emergency general meeting so well. Hence, only 46 members attended the meeting.
Discussion: Mr. Tabani started the meeting with explaining the
present situation of Bangladesh Ceramic Society in brief and initiated discussion. Mr. Hedayetul Islam, (general secretary In-charge) gave a detail report on the current scenario of the BcerS activities in front of the audience. Different members took part in the discussion. They were- Dr.Aftabuddin Ahmed, Mr. S.M Mahbub Alam, Mr. S.B. Zaman, and Mr. Manjural Karim. Treasurer reported about financial condition of the society. Mr. R.M. Khan, president of society attended the meeting lastly and informed the different situations of the society. He also added the necessities of this society. Treasurer reported about financial condition of the Society from 2006. It was observed by all
the speakers that the activities of the society is at very low level since 2006 and almost stand almost nilll since 2009.
It was generally felt that activities of the society is almost stand still and the society is inactive for the last 9 (nine) years. Reactivation of the society was proposed by all the members.
Resolution taken in the meeting:  a. Resolved the membership of the existing members of the Bangladesh Ceramic Society shall be made up to date by paying membership subscription for 2015. Dues for earlier years are hereby waived.

b. The existing Executive committee is hereby dissolved. An Interim Executive committee for a period up to 31st December 2015, headed by Dr. Aftabuddin Ahmed is hereby constituted.
Background of EGM of the BCerS Bangladesh Ceramic society started its journey since 1992. 1st Annual General Meeting of Bcers was held on 1993. The period of 1993 to 2002, was golden period of this society. After 2002, the activities of the society decline. Last Newsletter was published on June, 2002.  It is sad to say that due to unavoidable circumstances, society had a low or no-activity decade behind it. The list of member
has not been updated since long and membership fee remains unpaid. No new member enrolled for long and no newsletter brought out. Last AGM and audit was done in 2006.

Our Notice
view all
Society Calendar